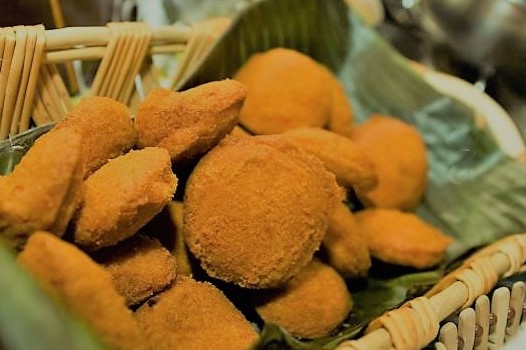 Acarajé is a delicious specialty of Afro-Brazilian cuisine, prepared with black-eyed bean and onion dough and then fried in palm oil. If you've never tasted this delicacy, or if you want to learn how to make it at home, check out this traditional Bahia acarajé recipe that I share on specialfood and prepare without error!

½ liter of palm oil for frying

How to make traditional Acarajé from Bahia:

To make your homemade acarajé, start by choosing beans. Then put the beans in a food processor and press 'Pulse' to break them slightly.

Tip: Be careful not to crush the beans in excess. You should only break them roughly, as this operation helps in removing the husks.

Put the beans in a bowl and cover with cold water. Leave to soak for a few hours, rubbing several times with your hands so that the shells come loose and rise to the surface.

Tip: Change the water or use a sieve to eliminate the shells.

When there are no more bean husks left, drain the water well and put the beans back in the processor. Add the coarsely chopped onion, season with salt and pepper and beat until creamy but consistent.

Put the palm oil in a pan or skillet and heat it. Place the acarajé dough in a bowl or pan and beat it well with a wooden spoon to spread the dough - the more sanded the dough, the better the consistency of your acarajé.

Fry the acarajé by spoonfuls, two by two at the most, until they are well browned. Finally, serve the traditional acarajé from Bahia, filling it with shrimp vatapá, vinaigrette and other garnishes as you like.

If you like Bahian cuisine, check out how to prepare tapioca couscous from Bahia and student tapioca dumplings. Enjoy your food!

Tip: Be careful not to fry the acarajé in very hot oil as it can be raw in the center.

If you liked the traditional Bahia Acarajé recipe, we suggest you enter our Bean Recipes category. You can also visit a list of the best Brazilian recipes. You may be interested to read about the custard apple mousse recipe/ mango lassi recipe/ chayote benefits blogpost/ kiwi jam recipe/ mandarin jam recipe.